November 08, 2018
We didn't actually plan on doing a second show in 2018. Then we got an invitation to register for the Back 2 Back Short Show Festival at Star Theatres, and whipped this quickie comedy out for two performances.
​
Thank you to Malcolm Harslett and the team at Star Theatres.

An award-winning absurdist comedy written by Mindy Kaling and Brenda Withers, Matt & Ben is the story of two struggling young actors and BFFs, Matt Damon and Ben Affleck, and the day a screenplay falls from the sky onto the coffee table in Ben's apartment. The title: Good Will Hunting. The authors: them! Is this the big break Matt and Ben have been waiting for... or are they being tested by a higher power?

Much like the screenplay for Good Will Hunting falling from the sky into Ben’s apartment, this opportunity to do Matt & Ben came about quite unexpectedly when Malcolm Harslett reached out to Oily Rag Theatre informing us about the Back 2 Back Short Show Festival and inviting us to join in.

Matt & Ben has been on my “plays I’d love to do” list since discovering it via Mindy Kaling’s chapter about its inception and first production in her memoir. Prior to forming Oily Rag I had attempted, unsuccessfully, to submit it to other groups. The requirements in Back 2 Back that we fit into a venue hosting multiple other productions, be suitable for a rapid between-show turnaround and accommodate a multi-purpose lighting rig and multi-tasking tech, etc., has been perfect for the Oily Rag ethos of doing the most we can with very little!

In case you were wondering, YES, the roles of Matt and Ben are supposed to be played by women (authors Brenda Withers and Mindy Kaling played the roles in the original production). Oily Rag has a particular interest in shows with interesting female roles. Matt & Ben, being an entertaining satire about ambition, the cost of success and the complex dynamics of male friendship, the casting of which may invite the audience to consider the social construct of masculinity* certainly fit the bill.

Thank you SO MUCH for coming, and supporting a very small group doing a slightly odd show. We hope you enjoy it.

* Or, just a silly play taking the piss out of a couple of super famous movie stars. Or, heck, why not both?

Stage Whispers - Shelley Hampton:
​
Arriving at the theatre knowing only that I was to see two female actors in a play about how Matt Damon and Ben Affleck came to write Good Will Hunting, I was totally unprepared for what ensued.
​
Matt & Ben, presented by Oily Rag Theatre, is a short, sharp, vitamin pill of energy. At 60 minutes, it carries the audience on a joyful and very funny jaunt based on a day in the life of the two Cambridge friends. Good Will Hunting was to thrust Damon and Affleck into the international spotlight, as big winners at the 1998 Oscar Awards, with the award for Best Original Screenplay. The play Matt and Ben was written in 2002 by Mindy Kaling and Brenda Withers and was first performed at the New York International Fringe Festival.

The story of how these two struggling young actors came out of nowhere to win an Oscar for writing Good Will Hunting is well known and this satirical offering explains the miracle behind this - the screenplay fell from the sky! It arrives fully written in Ben’s daggy 1990’s Boston apartment with the boys’ names as co-authors on the cover.
​
The play revolves around the dynamic of Matt and Ben’s friendship as they try to figure out what to do with the script. We see immediately that Matt is the smart one and Ben is the handsome one, cruising through life with minimal spelling skills. At the play’s opening, the two are plugging away at writing a screen adaptation of Catcher in the Rye, when the script arrives in the room.
​
The Director, Kristin Telfer, has found two perfect young actresses to play these male roles - Louise Byrne (Matt) and Jennifer Barry (Ben). They embody the roles, without creating caricatures. Byrnes has the mannerisms and laconic style of Damon to a tee and Barry is an absolute delight as the puppy-like, creative, Affleck. These actresses also showcase comic timing, a high level of skill with accents and great physical theatre.
​
Telfer’s direction is tight and the script is sharp and witty.
​
There are too many funny moments to single out all, but some which need particular mention are the flashback to a high school talent competition where ‘Bridge over Troubled Water’ is butchered by Damon, accompanied by a frenetic Affleck on tambourine, a slow motion full on physical fight between the two, and the cameos (also played by Byrne and Barry) of Salinger and Gwyneth Paltrow. There is more than a fair share of irony in this play with regard to the future relationships of Matt and Ben.
​
The set for Oily Rag Theatre’s production is very simple in the small space of the Chapel theatre, but effectively portrays the very humble beginnings of the pair. Lighting by Josh Koster is cleverly done to highlight, in particular, the narrative moments and flashbacks.
​
In summary, this play is a really good night out. It is bizarre, creative and extremely funny and a great example of the rich talent we have in South Australia.
​
Adelaide Theatre Guide - Anthony Vawser:
​
In the world of Adelaide theatre, it is always encouraging to see smaller companies taking chances with lesser-known material. “Matt & Ben”, staged as part of the Back 2 Back Short Show Festival, is a cute little one-act two-hander that gets a reasonable amount of mileage from its quirky premise, helped by an enthusiastic cast and breezy direction.

The gents of the title are not only of the families Damon & Affleck, but are played by ladies, the talented pair being (respectively) Louise Byrne & Jennifer Barry. This casting reflects the format of this show’s original production, performed by its authors Brenda Withers & Mindy Kaling.

Whether or not the gender disjunction on display really does result (as per the hopes of director Kristin Telfer) in a consideration of “the social construct of masculinity” is debatable, but the selection of Byrne & Barry has resulted in enough chemistry and electricity between the principles on stage – and from the performers out to their audience – for “Matt & Ben” to be worth the evening out.

Withers & Kaling have devised a piece of nostalgic fantasy/comedy that will take its audience back to the point in time when its two heroes really were essentially unknown and struggling – then imagines one possible explanation for their seemingly out-of-nowhere blockbuster-level success with “Good Will Hunting”. The fact that this is technically a two-hander does not mean that Byrne & Barry are restricted to a mere pair of characters – while there are enough possible levels of interpretation (and dimensions of reality) to ponder here that the show sustains itself quite cleverly.

Perhaps the biggest potential impediment to success for anyone attempting to stage this script in 2018 (it first premiered 15 years ago) is the relatively far-away nature of the events that it depicts, and the possible feeling of its central theme being more-than-usually ‘showbiz insider’ in nature – but “Matt & Ben” aims broadly (as per the programme notes) to be “an entertaining satire about ambition, the cost of success, and the complex dynamics of male friendship”. Certainly it manages to at least touch base – and entertain - with all of these elements, even if falling slightly short of an unequivocal bullseye.

This reviewer is glad for the giggles generated by “Matt & Ben”, in its modest-but-enthusiastic way, and awaits with interest the further exploits of Oily Rag.

This Is Radelaide - Caitlin Ellen:

We all know Matt Damon and Ben Affleck. But how much do we know about their epic friendship and how they came up with Good Will Hunting? Lucky for us, Mindy Kaling (The Office US and The Mindy Project) and Brenda Withers (The Office US) wrote a play depicting it all. Even luckier, Oily Rag Theatre brought the play to life last month in lil’ old Radelaide.

Part of the Back 2 Back Short Show Festival, the play accounts the origins of Good Will Hunting, the 1997 film that put Matt Damon and Ben Affleck on pretty much everyone’s radar. It centres on the two struggling young actor BFFs and the day the screenplay fall from the heavens and into Affleck’s living room. The 2002 play, entitled Matt & Ben, stands the test of time in terms of comedy. Satirical and playing on toxic masculinity, it traditionally has two women playing the roles of Matt and Ben. This time round the Hollywood actors are played by Louise Byrne and Jennifer Barry.

Louise Byne brings a prim and proper Matt Damon to life, “classically trained” and somewhat too good for his jock-high-school-best-friend Ben Affleck, who is hilariously played by Jennifer Barry. The two take us through their reactions of discovering the screenplay they never remembered writing and the highs and lows of their friendship. It includes so many mentions of Casey Affleck, and the best fantasy acting of Gwyneth Paltrow I have ever seen. Barry and Byrne had the whole audience laughing throughout, even entertaining my usual comedy-theatre-opposed mother with every joke and quirk.

But it’s not all laughs with this show. You’ll learn the trials and tribulations of male friendships, and find out what it’s like as a struggling actor looking for their big break. Will it fall from the sky? Probably not. It probably won’t come from making screenplays of classic novels either. Hopefully only good things are in store for Louise Byrne and Jennifer Barry.

If you get the chance to see Matt & Ben, do. It’ll be a right laugh for all involved. I’d also recommend keeping an eye out for whatever Byrne and Barry do next, and for whatever’s in store for Oily Rag Theatre as we come into the new year. 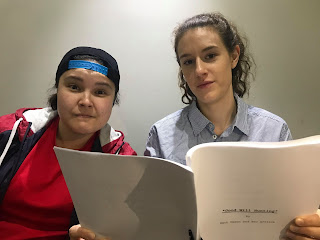 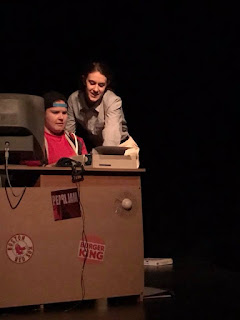 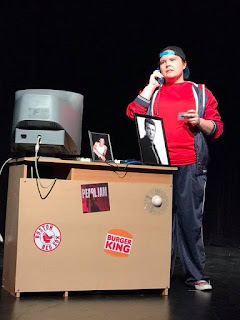 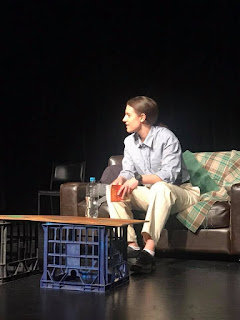 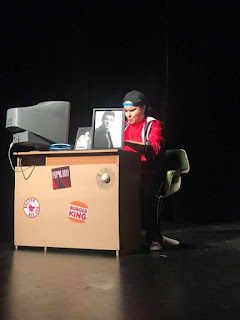 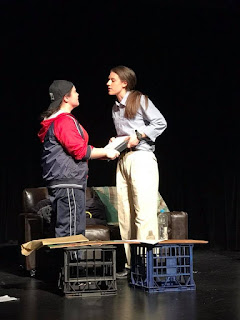 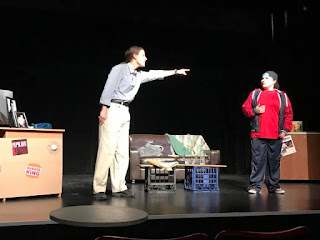 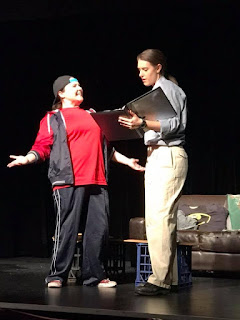 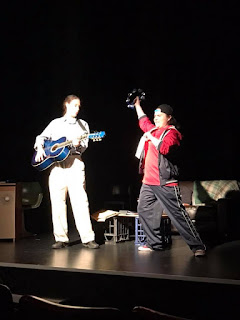 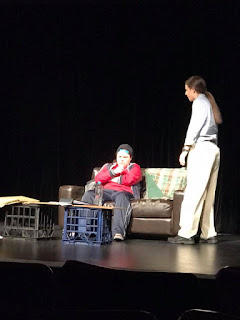 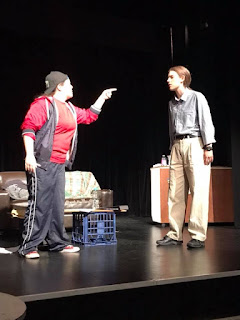 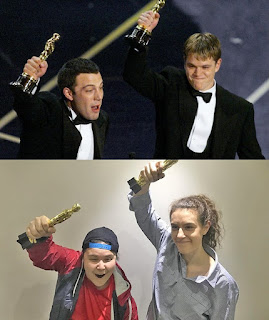 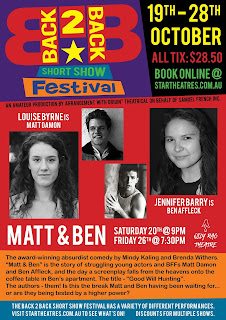 Popular posts from this blog

May 01, 2019
Tickets for our next production, Pilgrims  by Claire Kiechel, are now on sale via the Bakehouse Theatre website. Click here to book! See our Current Production page for production information and updates.
2 comments
Read more

Tickets now on sale for our Fringe 2019 production

November 28, 2018
Tickets for all Adelaide Fringe 2019 shows are on sale, which means you can now buy yours for our local-history-with-a-dark-twist walking tour, Kreepy Kensington.
2 comments
Read more

August 26, 2019
Our second production for 2019 was Claire Kiechel's Pilgrims , our first show at the Bakehouse Theatre. PILGRIMS by Claire Kiechel 1-10 August 2019 at the Bakehouse Theatre CAST: Shannon Gray - The Girl Jabez Retallick - The Soldier Kyla Booth - Jasmine CREW: Director (and lighting/sound operator) - Kristin Telfer Production designer: Shannon Norfolk Lighting designer: Katherine Kleemann SYNOPSIS The play takes place on board the Destiny, a starship transporting hundreds of migrants from Earth to their new home in a colony far beyond. Two solo passengers, an ex-soldier and a young woman, are assigned to the same cabin. The cabin steward, an AI called Jasmine, is regretful for this mistake and promises everything will be sorted out. It soon turns out however that the two passengers will have to bunk together for the duration of the journey, and be confined to their cabin due to a vaguely described “quarantine”. With only each other (and Jasmine when she visits) for
Post a Comment
Read more